The Virginia Economic Development Incentive Grant program (VEDIG) assists and encourages companies to invest and create new employment opportunities by locating significant headquarters, administrative, or service sector operations in Virginia. There must be an active and realistic competition between Virginia and another state or country for attracting the project.

The amount of each VEDIG grant is determined by the Secretary of Commerce and Trade, based in part on the Virginia Economic Development Partnership’s (VEDP) Return-on-Investment analysis and recommendation, and is subject to the approval of the Governor.

The program offers cash grants to qualified applicants. Grants are paid in five equal annual installments beginning in the third year after the capital investment and job creation or retention are achieved. There are no restrictions on expenditure of the grant proceeds.

Minimum capital investment, new job, and wage thresholds are based on the area of Virginia in which the company is located.

All projects must meet the following eligibility requirements:

A company locating in a Metropolitan Statistical Area (MSA) with a population of 300,000 or more in the most recent decennial census must:

A company locating elsewhere in Virginia must:

Minimum capital investment, new job, and wage thresholds must be met and are based on the area of Virginia in which the company is locating.

Public announcement of the project must be coordinated by VEDP and the Governor’s Office.

The company will be asked to provide annual reports indicating progress toward achieving its capital investment and employment performance targets. Reports include: 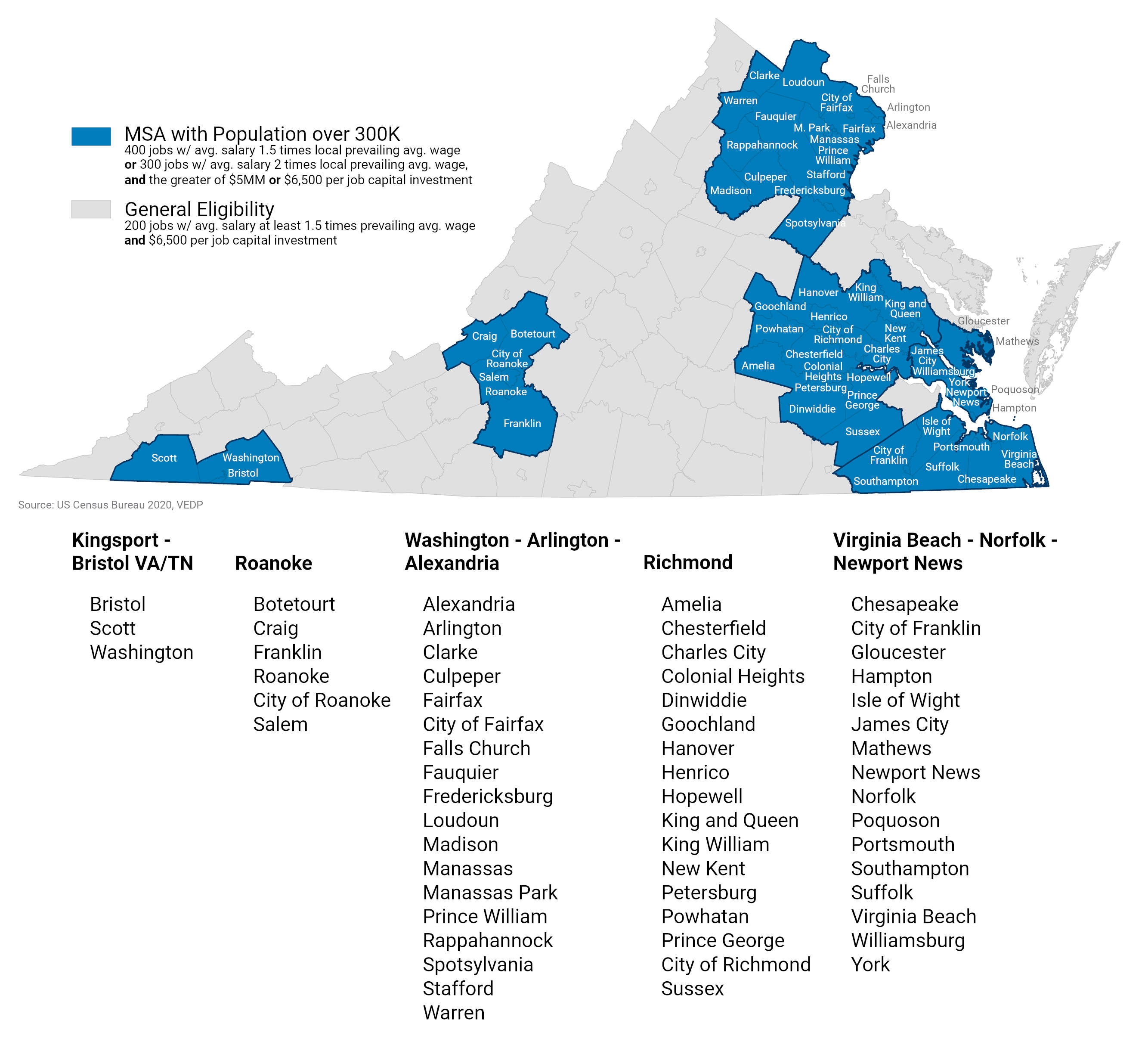 How are awards calculated?

There is no formula for calculating the amount of the grant award. In determining grant amounts, the following criteria are considered: a Return-on-Investment (ROI) analysis, new jobs, wage levels, overall employment, capital investment, area and regional unemployment, poverty and fiscal stress, the locality’s interest in the project, and company growth potential.

How long does the company have to make its qualifying investment?

In general, project completion will occur within three years, but no more than five years, from the date the performance agreement is signed.

What is prevailing average wage?

What happens if the statutory minimums are not met or maintained?

No VEDIG payment in any amount will be paid if the company fails to achieve by the end date stated in the performance agreement:

What happens if capital investment does not remain in place or if employment is not maintained during the payout period?

For this purpose, in the performance agreement, it is expected that the VEDIG grant will be allocated between the capital investment goal and the new job creation goal. Generally, the allocation will reflect the results of the Return-on-investment analysis.

What positions do not qualify as new jobs?

Seasonal or temporary positions, positions created when a job function is shifted from an existing location in the Commonwealth, and positions with construction contractors, vendors, suppliers, and similar multiplier or spin-off jobs shall not qualify as new jobs.

Are contract employees allowed to count as new jobs?

The Commonwealth will consider dedicated, full-time, Virginia-based contractors as eligible net new jobs should the company desire to count them toward the new job targets. The requirements for contract positions are the same as those positions on the company’s payroll and would be required to meet the same requirements as a “new job.”

An applicant may be granted more than one VEDIG grant at a time if the scope of each project has a different timeframe and independently meets the minimum investment and all other criteria.

What programs are included within the Virginia Investment Partnership Act?

Can the company participate in multiple performance incentive programs under the Virginia Investment Partnership Act at the same time?

Companies are only allowed to participate in one program per project under the Virginia Investment Partnership Act at any given time.